The City of Westfield is constantly improving to become a safer, more efficient, and more aesthetically pleasing community. The following is a summary of various projects completed through the Westfield Engineering Department for the better part of the past decade. 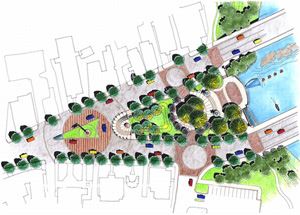 The Great River Bridge project was a multi-faceted effort encompassing bridge, park, traffic, utility, pedestrian, and street scape improvements. The goal was to provide more than just a long term resolution of traffic congestion but also to spur an urban renewal effort. A joint partnership between local, state, and federal funding provided the opportunity to construct this important link through the heart of downtown Westfield. Some of the major improvements included new and improved bridges, new rotaries on both ends of the bridge to assist traffic in both directions, walk ways, fountains, plants, trees and bushes, all while preserving the surrounding areas and keeping the city in mind. The image to the left shows a sketch depicting all the details of the Great River Bridge Project. The video below demonstrates a 3-D model of the Great River Bridge project and everything that was done.

This project was an effort to revitalize the main arteries and central green space of the downtown area. Improvements include complete reconstruction and reorganization of the roadways and traffic system at the intersections of Main, Broad, Elm, and Court Streets. Sidewalks were improved, street trees were planted, and infrastructure was upgraded. The central piece of these improvements is the new Park Square Green. This modern space is set up for accessibility, convenience, and aesthetics, and includes a stage for performances, a multilevel fountain, and a broad green space ideal for arts festivals, concerts, or a picnic in the park. Upcoming improvements will include state-of-the-art, energy efficient LED lighting and a multi-season pavilion. Construction and installation of the pavilion to be undertaken by the Westfield Vocational-Technical High School.

The Park Square Green Pavilion in Westfield was built with help from students and faculty at Westfield Vocational Technical High School. This cooperative effort between students and professionals is a truly unique project. For the overall plans and elevations, door elevations and details, and the electrical plans with details and schedules, please see Park Square Pavilion.

This Project consisted of a multi-use trail connecting a future portion of the Columbia Greenway with Elm Street and Sacket Street. With these connections, we set up for future expansion of Multi-use trails to the East and West along the top of Westfield River Levee. See Westfield River Esplanade.

The City of Westfield improved the road alignment, traffic flow, and drainage along this corridor. New, optimized traffic signals were installed at the intersection, and dedicated turn lanes and signals were added and/or enhanced. A center turn lane along North Elm Street was added for utilizing access of adjacent streets while maintaining two through lanes both north and south bound. Sidewalks were also addressed as part of this effort.

This project consisted of various infrastructure and streetscape improvements in the area bounded by Court St, Elm St, Franklin St and Washington St, known as the Gas Light District. The intent was to create a very pedestrian and bicycle friendly environment and encourage the arts and entertainment industry within the district. General design standards set for recent "Old Town" projects were used and enhanced.

Improvements to Route 187 have allowed for better pedestrian and traffic flow, increasing safety and efficiency, to this heavily traveled road. See Route 187 for more details.

This project involved the removal of the three clay tennis courts at Municipal Playground and replacing them with six asphalt pickleball courts and one asphalt multi-use court, for pickleball and tennis. Associated work involved adding a new swale and yard drain for improved drainage, replacement and addition of chain link fencing, an additional fence gate for easier access to the courts, and new LED lights for evening play. The construction for this project started mid-June 2019. Substantial completion for the project was September 2019.

Phase 2 will continue from the end of Phase 1 near Fairview Avenue and extends to the Court, High, and Mill Street intersections. It will also include the improvements to Lloyds Hill Road and West Silver Street. Phase 2 is currently in the design stage with construction estimated to start in 2021.

This project included the replacement and addition of sidewalks on both the north side and (a portion of) the south side of Union Street encompassed by Union Avenue (Route 10-202) on the west end of the project and the Park Square Townhouses (#140 Union Street) on the east end. Work consisted of replacing and extending the existing sidewalks on the north side of Union Street with mild to moderate re-grading, a new sidewalk along the south side of Union Street, new curbing on both sides of the street, replacement and re-grading of driveway aprons, and a new crosswalk with rapid flashing beacons (RFB's) located at the Powdermill Village Apartments that can be utilized to access PVTA bus stops. The project was completed in Fall 2021.

This project provides enhanced safety measures to users of the Columbia Greenway Rail Trail crossing at the intersection of Shaker Road. This project also includes a connector to Country Club Drive to accommodate a desire for recreation via walking, jogging, biking, and cross-country skiing on City-owned property. The project was substantially completed in early Fall 2021.

The Columbia Greenway Rail Trail is Westfield’s Rail Trail. It is a multi-modal linear park, which follows along a portion of the route of the former New York / New Haven / Hartford Rail Road (and one-time Northampton, Massachusetts to New Haven, Connecticut canal). Stretching from Southwick, Massachusetts to the south, to the Great (Westfield) River Bridge to the north, the Columbia Greenway Rail Trail traverses downtown Westfield on a mostly elevated line for a total of 3.2 miles. The first section from Southwick to just south of Tin Bridge was completed in Fall 2012. The second phase extended the trail northerly to East Silver Street and was completed in Summer 2015. The third phase of the project continued its northward extension to Main Street and was completed in late 2016. The fourth phase, completed in 2018, focused on the northern end of the Rail Trail, with major rehabilitation to the trail's bridge over the Westfield River. The final phase of the project is currently under construction (2020-2021), connecting from Main Street up to the Westfield River. This final and critical section will bring the elevated off-street trail straight through the heart of Downtown Westfield.

The Rail Trail incorporates bridge crossings of all streets in the downtown, with one surface street crossing at Shaker Road. The trail ties into the Southwick trail to the south which then becomes the Farmington Valley Greenway, extending southerly to New Haven, Connecticut. The Columbia Greenway Rail Trail is currently being extended to the northern bank of the Westfield River. Future connection to communities in Southampton, Easthampton (the Manhan Rail Trail) and Northampton (the Norwottuck Rail Trail) is currently being evaluated.

This project replaced the culvert under City View Road, feeding Jack's Brook into Little River. It included the replacement of a failed corrugated metal arch culvert with a new 6.5 ft. tall by 12 ft. wide precast concrete box culvert, as well as new wingwalls and headwalls, modified rockfill drainage swales, new roadway pavement in the affected area, as well as new metal guardrails on each side of the road. This project was completed in Fall 2022.