This multi-use rail trail is a phased project that connects the south end to the Southwick Rail Trail and extends north, currently to Main Street in downtown Westfield. Future phases will ultimately connect this trail to Women's Temperance Park, just north of the Westfield River. Project primarily converts pre-existing railroad to a newly constructed ten-foot wide multi-use trail elevated throughout the downtown Westfield area, one of the first and only of its kind in the United States.

Other improvements include various kiosks, benches, lighting, and the rehabilitation of several bridges: Little River (w/ overlooks), South Meadow Road, and East Silver Street. Future phases of the trail include a new trademark bridge over Main Street, with rehabilitation to Thomas Street, Chapel Street, Elm Street, and Orange Street bridges. At the north end of the trail is a major rehabilitation project to the Westfield River railroad bridge, which is currently under construction.

Please use the links provided below to view the plans for each phase of the Columbia Greenway Rail Trail: 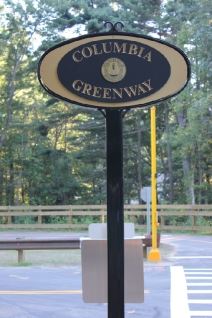